By now you must be well aware that Twitter was hacked, don’t worry it is now running smoothly. I visited the usual social media suspects and found out that most of them were just running with the story and no one addressed why it was done today and if it will be done again.

Here is what the image that Iranian Cyber Army put up looks like: 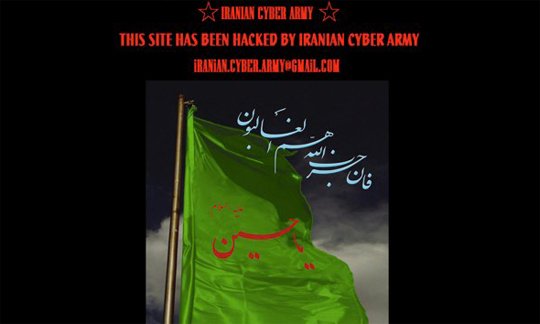 It is the 1st of Muharram in Iran, Islamic New Year. Muharam marks the beginning of the Hijri (Muslim) Calendar. Iranian Cyber Army was just trying to wish Twitter “Happy New Year” in a way one wishes an enemy.

On a more serious note, Muharram is the most sacred month in Iran as the majority population is Shi’a. The first 10 days of Muharram commemorate the Martyrdom of Hussain (A.S), the grandson of Prophet Muhammad (P.B.U.H). He was killed while defending Islam, Iranian Cyber Army chose 1st of Muharram for a reason. See the big picture?

The red wording on the green flag says “Ya Hussain” in Arabic (I don’t speak Arabic, I can read it though). Rest I believe is in Farsi, I have asked an Iranian friend to translate but if you know it, please let me know what it means so that I can update the post.

Here is a quote from CNN that I think sums it all up:

Earlier this summer when Iran’s disputed presidential election spiraled into bloody protests, the opposition took to social networking and used Twitter to inform the world. Protesters beamed images from the violent protests at a time when the mainstream media outlets had a hard time getting access to Iran. Twitter became so fundamental in spreading news of the protests that followed that the U.S. State Department asked the company to delay a planned shutdown for maintenance.

Just a heads up for Twitter, they might want to consider beefing things up for 10th of Muharram.

Blogging Strategy: Extending Your Voice To The World