Tweeting is now causing some problems for Jonhathan Powell of Fayetteville, Arkansas. Last month he was called for jury duty and he decided to tweet while serving as member of the jury, this act thrilled his Twitter friends but prompted the defense attorney to seek a new trial.

Question is, on what grounds? Well, Powell’s tweets showed his bias against defendant Russell Wright (Stoam Holdings), who was found guilty of mismanaging funds. The jury awarded investors who sued Stoam $12.6 million. 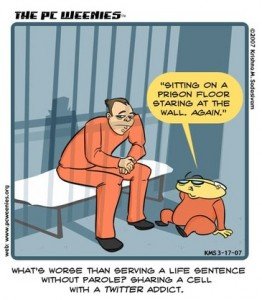 I have never been on jury duty but I know that you can’t talk about the case until it is over. You can’t try to seek facts outside the court, you can’t let any commentary taint your opinion about the defendant, and for the love of god you can’t tweet while serving on jury duty.

What I see is someone trying desperately to get popular, of course these days the medium has changed from TV to Internet. How many friends you have on myspace? How many people stalk (follow) you on twitter? You get the point…

Stoam Holdings would have been declared guilty even if Powell didn’t exist but his twitter of an existence has now caused a fairly normal trial to become a mistrial. Last time I checked, taxpayers pay for the costs associated with trials. We will be paying for two trials when there only need to be one, thanks to Jonhathan Powell.

Master of All Distractions