Mapiz is a location based iPhone app similar to Foursquare and Gowalla but different in its unique approach. Instead of letting people check-in to places of interest, it makes itself useful by providing real time public transit information and lets you communicate with people around you.

Not only can you see where your friends are, you can see everyone around you on Mapiz if they have selected to publicly broadcast their location. Apart from that, once you select one of the few available transit systems, you can see departure and arrival information in real-time. 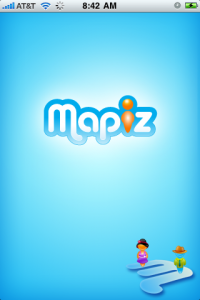 Mapiz was founded by engineering students at U.C. Davis. I sent an email to Mapiz’s co-founder Max Guan and asked if he could answer couple questions about Mapiz. He was kind enough to send me a reply.

Zahid: When there is Foursquare and Gowalla, why Mapiz?
Max: Instead of approaching social networking or gaming directly, we want to offer something people need everyday – a real time transportation tool. Then build up the network around it. We believe in order to make majority accept the idea of location based social networking, it has to be something useful as an entry point.

Zahid: Would it be fair to say you are taking the Facebook approach? (One university then 10 then 30)
Max: We admire Facebook’s strategy. But mobile application can not run the exactly same approach. Every student can access internet but not everyone owns an iPhone. Mapiz is going to open registration to public but we added the “network” option to protect the privacy and keep our users in the same group. 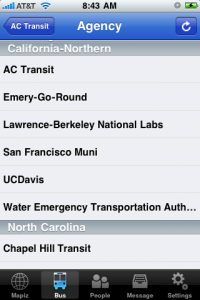 I am a big fan of location based services and Mapiz is one of my favorites. In future I see transit systems providing free Wifi access to commuters and thus making it easier for them to be in constant communication with others.

Most popular transit system in the bay area is BART which is not currently supported by Mapiz. BART has been testing Wifi and in future will allow cellphone signals in the tunnels. Once that is implemented, BART users can benefit tremendously from Mapiz.

Currently Mapiz only supports iPhone, you can download the app from the App store.

Mapiz is currently having a promotion where they are giving away 15″ MacBook Pro to new users who signup and invite their friends. The more people you invite, the higher chance you can get a MacBook Pro. Don’t wait!

I wish Max and his team all the best with Mapiz. Rock on!