Interesting things happen everyday in the world but there are some stories that make people think. These stories move you in the most unusual way. One common theme in all the moving and unusual stories is human emotion.

Few months ago I saw a story on 60 Minutes about a rape case where a man was wrongly convicted. The rape victim was the key witness during the trial and she was 100% sure that the accused was the alleged rapist. Well, after few years, it turned out that the accused wasn’t the real rapist. Once the real rapist was caught and sentenced, wrongly accused and the victim had a one on one meeting.

Wrongly accused forgave the accuser…. that is powerful and incredible.

GITMO reunion is a similar story.

In 2008, Brandon Neely, was searching for friends on Facebook when he entered the name of few detainees that he guarded during his time at Guantanamo Bay. Neely, an army veteran, spent six months at GITMO in 2002.

Shafiq Rasul was one of Neely’s prisoners and showed up in the search results. Neely decided to message Rasul and was “astonished” when he responded. A BBC reporter found out about this amazing exchange and decided to fly Neely to London so that he can meet Rasul and another prisoner in person. 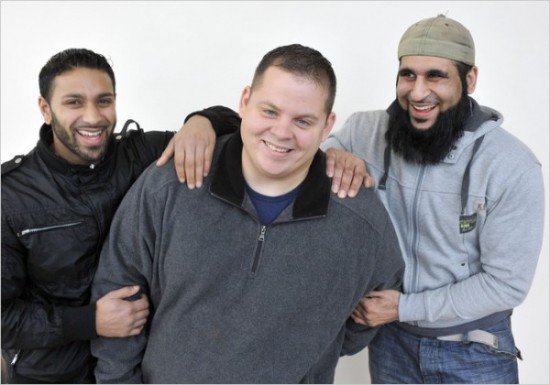 BBC link has the video of the original meeting which is not “embed” friendly. Go over and watch it!