Facebook’s New Homepage Is Not For Everyone

Last week Facebook decided that they needed to tweak the news feed to make it more relevant. They created two kinds of news feeds, one is real time (live feed) and other is not (news feed) but is relevant to you according to Facebook.

Personally I said okay, that’s nice Facebook is innovating and providing me with relevant information but I went around asking friends what they thought. Teenagers told me “it’s dumb,” adults told me “it’s stupid,” and the most heart breaking comment came from my wife, “I hate It.” 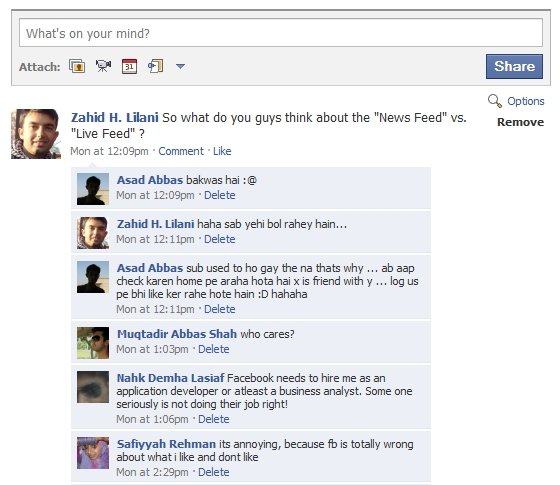 My wife spends more time than I do on Facebook any given day, she is addicted to Farmville and we discuss growing pomegranate at the dinner table. She is right in her own way because she doesn’t find the News Feed and the Live Feed useful because it is not like she is missing out on anything as she is always online. According to her it is confusing to say the least.

I on the other hand think it is useful because I am not on Facebook 24/7 and then when I login, I get to catchup on items or status updates that I might have missed. That doesn’t mean that Facebook knows exactly what I like and what I donn’t.