I wasn’t a fan of Facebook IPO, I mean, $38/share? It’s one thing to be hopeful and another to be an emotional fool. 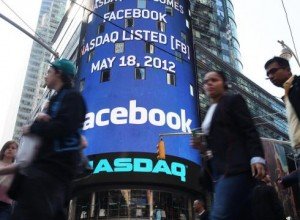 What you see now is a correction because everyone that could make money (bankers, lawyers etc) have been paid, let me add, handsomely.

Let’s be clear here, Facebook’s revenues grew 32%. That said, investors are not happy. Stock closed at $21.09 yesterday; 21% drop since July 27th, day after the earnings announcement. 45% drop since the IPO.

Facebook is not your conventional company. Its business model revolves around analyzing ginormous amounts of user data and then innovating mechanisms to monetize it. As of June 2012, it had 872 million active users, but not customers. Its customers are advertisers and we the users are the product being sold.

Facebook is a media network, similar to Google, not a social network. It happens to have a social component, that’s about it. It should be treated similar to any other media network dependent on advertising revenue.

Take yesterday’s closing price, $21 x shares outstanding of 2.74 Billion = $57 billion. But it is not worth $54 billion because it’s 2011 revenue was $3 billion. In tech industry, stocks trade at an average 8 times (conservative) the revenue. Revenue times 8 gives us $24 Billion. That means the market price of its stock should reflect that reality but it doesn’t because if it did, the stock would trade at $9 ($24 Billion/2.74 Billion shares outstanding).

That doesn’t mean Facebook is a dud, it’s not, just overvalued.

Some provisions in JOBS Act are bothersome